MWOC Welsh League Event at Aberedw Rocks on Sunday 8th May was a fantastic event - Many thanks to Terry for masterminding the event including organising, planning & map printing!, to Bev for holding the fort at registration and download, Bill for download and speedy results processing and website uploading, Alistair for catering services, Robert for controlling the event at short notice, Kate, Clive, Joe, Dafydd, Alistair, Gabriella, Robert  and Terry for control collecting and everyone else who helped out! A fantastic day out and great to welcome those enjoying their first orienteering event ...I was asked if the weather is always this good at orienteering events ! Well done Terry for organising a heatwave too... Congratulations to Swansea Bay Orienteering Club on their junior team winning the Junior Inter club Yvette Baker Trophy final heat between the Welsh clubs and we wish you success in the next round!

Congratulations to Megan Carter Davies has been selected to represent Great Britain in the 2016 Junior World Orienteering Championships which are being held in Scuol, Switzerland 9th - 15th.  July 2016 and Fay Walsh has been provisionally selected for the 2016 Junior European Cup, which is being held in Central Scotland 30th September – 2nd October 2016. Further selection information here https://www.britishorienteering.org.uk/index.php?pg=home&action=news&id=MzQ1MA==&rtn=aHR0cDovL3d3dy5icml0aXNob3JpZW50ZWVyaW5nLm9yZy51ay8=

MWOC members enjoyed great weather at the British Orienteering Long Distance Championships on Saturday 30th April at Brown Clee Hill in Shropshire. The terrain was very challenging with tricky navigation through the complex former mining areas and tough running through the rough marshy areas. Great panoramic views if you had time to enjoy them! Thanks for the great welsh atmosphere around the SWOC tent cheering in the welsh runners. Congratulations to Ben Mitchell from SBOC on coming 2nd in M21E and Claire Dallimore coming 3rd in W21E – great to see Wales performing so well!!

Well done to the MWOC members who took part in the Northern Championships in April including an urban  event in Whitby town exploring all the streets and alleyways followed by the Mulgrave Woods event -  big congratulations to Harry Thomas who came 3rd in the M14 class. 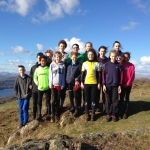 Following the JK many MWOC juniors joined the rest of the Welsh Junior Squad for some great  training arranged by Mark Saunders in the fantastic Lake District terrain, based at High Wray National Trust Base Camp. Thanks to Mark for excellent training exercises and to all the parents who helped out with the catering and transport. Please contact Gabriella chairperson@mid-wales-orienteers.org.uk if you would like to know more about the training opportunities with the club and the Welsh Junior Squad.

Against the odds, five teams, of mixed ability and experience plus some recovering from injury, competed this year.

Overall results were pretty good and but for a couple of mispunchings it would have been a bMWOCbuster performance.

MWOC stars:  Will, Tom and Meg.

Another year, another JK!

Many thanks to Mike Kay MWOC Relay Team manager for all your hard work organising the teams, entries and support on the day.

Well done to all the members of MWOC who travelled to Yorkshire to compete at the JK over the Easter weekend, which is the largest annual orienteering event held in the UK. Day one was a sprint event held at Leeds University, day two and day three were cross country events with the times added up over the two days, held at Wass Forest in the North Yorkshire Moors and Kilnsey in the Yorkshire Dales, with the relay being held at Storthes Hall close to Huddersfield.  The heavy hail, sleet and snow on the exposed Kilnsey was an added challenge for anyone running later in the day – well done to all and thanks to the MWOC tent for providing much needed shelter! The penguin huddle  of a record number of Welsh orienteers in a tent helped provide added warmth! Notable results from MWOC members were as follows -  Apologies if I have left anyone out

Congratulations to Terry Smith MWOC on being awarded Welsh Volunteer of the Year 2015 by the Welsh Orienteering Association .

Well done Terry - a well deserved reward for all your input into orienteering in Wales through your role as mapping officer for MWOC, planning and organising MWOC events and a member of the MWOC committee, fantastic input into the Powys schools orienteering league and developing orienteering within Scouts in Wales.Thanks Terry for all your hard work which is much appreciated by all in Wales!

Congratulations to the Welsh League winners of 2015

Congratulations to the MWOC members who competed in the Welsh Championships on 6th March 2016 at the great new site on the Sugarloaf mapped by Ben Mitchell – thanks to Nick, Richard and Mark for organising, planning and controlling the event. It was a real treat to experience fantastic runnable woodland with moorland and former mine workings in the mix to add to the challenge.

“Cool, Awesome and Educational”; Orienteering at school for ages 6-15