Each cluster is made up of a number of primary schools, which feed into the High Schools of the county, John Beddoes, Llandrindod Wells, Builth Wells, Llanidloes, Newtown, Llanfyllin and Bro Hyddgen.

The cluster event comprises of a days orienteering activities which includes a series of coaching sessions followed by a competition. The winners of each event are then selected to go forward to compete in the respective North and South County Championships.

We had a record number of 1052 participants at the cluster events last Autumn, followed by a further 423 competitors at both County Championships in February this year.

The 2016 -2017 series of events will come to a climax on the 16th June 2017 when the winners of the Powys, Ceredigion and Gwynedd Championships will now go forward to represent their counties at the Tri-County Championships.

Picture below shows the winners from Llanbister Primary School who won the team prize for the white course at the South Powys Championships in February. The team prize goes to the first three pairs with the highest finishing place. 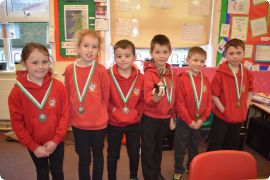 Winners of the Team prize for the white course