Well done to all MWOC members who travelled to Cannock Chase to take part in  the JK Festival of Orienteering over the Easter Weekend and a huge thankyou to all the organisers, planners, controllers & volunteers who helped to make it happen.  The Sprint Orienteering race around MOD Stafford provided a great start to the weekend with some very fast paced racing and quick route choice decisions required.  Megan Carter-Davies had a fantastic run coming in  1st  on the W21Elite course. MWOC members really enjoyed trying out the Biathlon which was kindly provided by Hans Mandahl and Per Anden who came over from Sweden to provide this opportunity to try out biathlon which combined a short sprint orienteering course followed by using a low resolution infra-red rifle to aim at a target with penalties for missed targets.  Katie Reynolds from SBOC may have found a new discipline as she had perfect aim even after the running! The JK overall competition combined the results from the  middle distance race at Brereton Spurs( which as well as a multitude of confusing spurs had a lovely uphill finish for maximum spectator enjoyment) and the long distance race at Beaudesert &Brereton Hayes which had a grand start in the walled garden and made the most of the complex terrain with some great route choice challenges. Congratulations to  Megan Carter-Davies who was  3rd overall and Fay Walsh 9th in the W21E. Hannah Thomas achieved championship time in the Middle distance race and came 16th overall W14A. Harry Thomas 23rd M16, William Thomas 25th M18E,  Joe Thomas 18th  M20E.  Day 4 dawned with a blanket of snow for the relays at Beaudesert and impressively the organisers managed to arrange parking for all on the main site. MWOC members were competing in 8 different teams in the relays. The Wild Welshies Fay Walsh MWOC, Katie Reynolds SBOC, Megan Carter-Davies MWOC

competing in the Women’s Trophy made the most of their neighbouring small clubs alliance with an impressive 3rd place. We had three teams in the Mixed Adhoc with close competition between the two top teams with the ThoMoWocs of Daniel, Hannah and Dafydd Thomas coming in 4th place just ahead of MWOC Dad, Lad &Lass Harry, Emily& Clive Thomas in 5th place and the  CoMWOC-Mays Steve & Zoe Walsh and Robert Griffiths 42nd. MWOCing birds Eunice Carter, Gabriella Walsh & Kate O’Sullivan came 13th in the Senior Women’s (120+). In the JK Trophy category Joe Thomas was running in a ShuOC Men of Steel team and came 26th on his leg but had a mispunch in the team. The Just Kidding team with William Thomas MWOC, Tom Wood Eryri and Oscar Healey from SBOC was showing great promise but also suffered a mispunch in the team. Michael Lai was running with a UBOC Ridge of death team with Matt Pickering and Thomas Dixon which came 28th.. 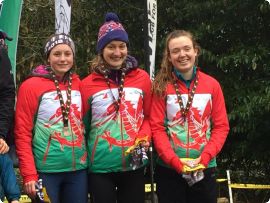 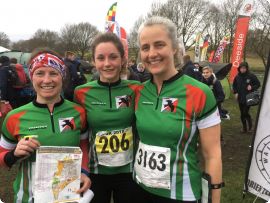 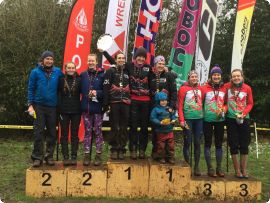 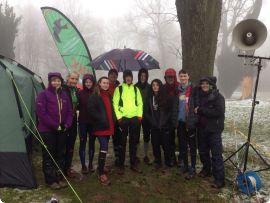 MWOC members enjoying the weather at the JK Relays